Pneumatic shears are used to make straight or curved cuts in sheet metal. When you have some heavy-duty metal that needs cutting, and a regular power saw is capable, then the first place to turn is pneumatic air shears. This powerful air tool is designed to be used when you need a precision cut through the thickest metal without having to use sophisticated milling equipment.

This article will provide all the relevant information about pneumatic shears along with comparing them with pneumatic nibblers.

What Are Pneumatic Shears?

Pneumatic shears are small hand-held cutting tools that run on compressed air. Their composition is similar to scissors, but they’re designed for use with sheet metal. They have a small opening and jaws on either side. You insert the sheet metal between the jaws, and push forward, automatically cutting the sheet metal. The sheet metal will typically be cut along the length of the blade.

Pneumatic shears are commonly used to cut panels and ducts in mechanical, electrical, plumbing, HVAC, and automotive applications. They run on compressed air and contain few moving parts, so they typically run cool, have a long lifespan, and weigh less than corded or cordless models.

How Do Pneumatic Shears Work?

The working principle of pneumatic shears is simple. An air shear works by using the compressed air feed in your workshop to power a motor within the handheld tool. In turn, this forces a blade to move thousands of times per minute in order to cut through whatever is pushed into it. Air shears work like incredibly powerful scissors, only they cut through things a lot tougher than sheets of paper.

Single-cut shears use a pair of blades that are cut like scissors to maneuver along curves with greater ease than double-cut shears. They cut flat sheets and navigate ridges to cut corrugated metal. As the single-cut pneumatic shear is advanced through the material, a sharpened moveable blade rapidly cuts against a fixed blade (or anvil), with the metal in between.

This slices cleanly through the sheet metal without creating any unnecessary waste material. Though it is possible that the material distorts to some degree as it is being cut through. This distortion is normally a warp or bend. And for this reason, they tend not to be the first choice when it comes to an application that requires very small and specific tolerances.

Single cut shears can cut curves but usually require a wider turning circle than nibblers, and if pushed beyond their capabilities they will leave a jagged and distorted edge.

One of the primary advantages of single-cut shears is their cut capacity. They are usually capable of more heavy-duty cutting tasks than either double-cut shears or nibblers.

Double cut shears use two separate cutters which allow you to remove a thin strip of material as the tool is advanced through the material. In this way, they leave a wider kerf, like nibblers, but the key is that they are much easier to clean up after.

They also perform cuts with minimum distortion, as long as they are kept fairly straight. Double-cut shears do not cope well with curved cuts and are certainly not suitable for heavier duty applications like single-cut shears are.

However, they provide a quick and easy way of producing a clean cut for many applications in light gauge sheet metals. This helps to preserve the shape and structure of the metal without creating any excess waste.

I have picked out a couple of examples of pneumatic shears readily available on Amazon for purchase. The first is this Ingersoll Rand heavy duty 20 gauge pneumatic shear. 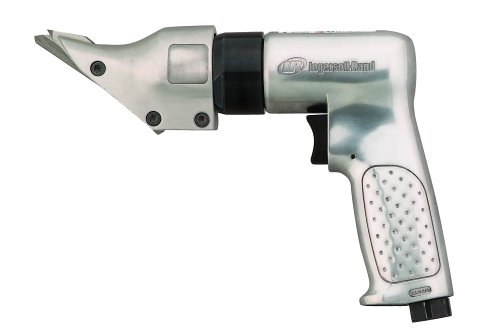 The second is this NEWTRY air industrial shears.

Although nibblers and shears are generally used to perform the same function, the key differences between them are:

The biggest difference between pneumatic shears and nibblers is the speed you can cut. Pneumatic shears are the slower tool of the two, along with the chunkiness of them making curves harder. Nibblers, however, are a lot faster as they can glide along with metal sheets with ease.

Though it may not vary significantly, there is a slight difference in the radius you are capable of cutting with either tool. Since the nibbler glides along the top of the sheet metal, you are to achieve a far more accurate and tight radius.

Pneumatic shears are generally larger and clumsier, making it harder to precision cut a radius. To be able to achieve similar results, you will need to do multiple cuts and approaches from different sides, but this may not always be possible.

Kerf is the material removed when cutting a piece of sheet metal. With nibblers, the kerf is fairly wild, meaning that your cut has a thicker slot cut along the tool’s path. Pneumatic shears, on the contrary, can have a very minimal kerf, using them allows you to minimize the kerf on your cuts.

Nibblers create a lot of mess while cutting, throwing metal all over the place, and causing you to have to clean up a lot, the price you pay for their speed.

Pneumatic shears, on the other hand, isolate the mess due to their method of cutting. Typically you will have a single, winding piece of scrap sheet metal that travels out of the top of the machine, and coils as you cut which is easier to dispose of.

What are pneumatic shears?

Pneumatic shears are petitie hand-held cutting tools that run on compressed air. They have a small opening and jaws on either side, allowing you to insert sheet metal between the jaws, and push forward, automatically cutting the sheet metal.

What is a air shears used for?

How do pneumatic shears work?

The working principle of pneumatic shears is simple. They work by using the compressed air to power a motor within the handheld tool. This forces a blade to move thousands of times per minute in order to cut through whatever is pushed into it. Air shears essentially work like incredibly powerful scissors, only they cut through materials like sheet metal instead of paper.

How do you use metal air shears?

As metal air shears have a small opening and jaws on either side. You insert the sheet metal between the jaws, and push forward, which will automatically engage the tool to cutting the sheet metal.

If you’re wondering how to plumb an air compressor setup, visit our guide!

If you have any questions about pneumatic shears, please leave a comment below, with a photo if applicable, so that someone can help you!

Using an Air Compressor as a Pressure Washer – How To

How Does an Airbrush Work? Airbrushes & Compressors Explained