How to Measure Dew Point – What is Dew Point in Compressed Air Systems?

The dew point of air has significant ramifications for compressed air users. Compressed air is one of the largest consumers of energy, accounting for 75% of the lifetime cost of a compressed air system.

Energy-saving opportunities are available everywhere, and it takes very little effort to establish them. Nothing offers as good as a return on investment than dew point measurement for ensuring that the efficiencies and costs are kept at their highest and lowest respectively.

This article will provide you with all the relevant information on the dew point and how you can calculate it.

What is Dew Point?

Let our minds wander to where we are sitting on the back deck, and the hot summer sun is beaming down. A bead of sweat trickles down our chest, and we are thirsty! We reach into the cooler for another, and pour a frosty bottle of our favorite barley and hop beverage into our glass.

Let us also imagine that we put this ice-cold mug of suds on the railing of the deck right beside us. Very quickly we’ll see beads of water forming on the outside of the cold glass.

The dew point is the temperature at which the water vapor in the air can no longer stay in a vapor form and condenses from a vapor into a liquid on a surface. At any given temperature, there is a maximum quantity of water vapor that air can hold, known as the water vapor saturation pressure, any water vapor added beyond this point results in condensation.

The film of air around the mug in the picture cools rapidly due to the cold temperature of the surface of the glass. The air that is touching the glass quickly gives up the moisture it is carrying and deposits it onto the surface.

The temperature of the air that is touching the glass has quickly fallen below its dew point, reducing the ability of that air to hold vapor, and forcing that water vapor to condense out of that air.

That newly condensed water then trickles down your mug and onto the front of your chest as you swallow the frosty beverage. Mmmm, delicious!

For the water in the air to remain in a vapor form, whether it is the air on your back deck touching the glass or the compressed air in your plant compressed airlines, or in the hose to your air tool, the air passing through the pipe or hose, or tube must be warmer than the surface it is touching, otherwise, water will condense out.

Condensation is a big problem

As I’ve said, as the air cools, it can hold less water vapor. What happens when the hot, vapor-laden air from your compressor tank reaches the plant’s airlines? The compressed air cools rapidly, the water vapor in the air condenses out, and you now have free water flowing through your airlines.

However, if the air entering your plant from your compressor had a dew point that was below the temperature existing throughout your plant, then no water vapor should condense from the compressed air into free water in your airlines.

Condensation is a serious problem within compressed air systems as it can lead to several problems, including blockages in pipes, breakdowns of machinery, contamination in the system, and potential freezing in cold weather conditions.

One way to keep on top of this and avoid those problems is keeping an eye on dew point which most modern facilities do. Dew point monitoring is a system put in place which includes a series of high-quality dew points sensors and monitors in the compressed air system.

Having such a system in place can enable you to maintain the desired moisture level in a compressed air system to prevent the levels of condensation from building up.

Air Quality Importance – Why Does Compressed Air Need to be Dried?

As temperatures rise in compressed air systems, the condensation rises in the pipelines after the air compressor when there is a temperature decrease. Water is removed from the compressed air using water separators, traps, and filters, but the air compressor output of air is still very close to the saturation vapor pressure. With is relative humidity being near to 100%, it’s important to ensure you stay on top of it.

Problems caused by humidity in airlines have been ignored for many, many years. Mostly because of the difficulty in understanding the problem at hand. While the development of increasingly demanding manufacturing processes and products continue to significantly increase, so does the demand for clean, dry, high-quality compressed air.

The quality of the air within your compressed air system is very so important for the result of your operation. For instance, if you were carrying out jobs with a spray painter and any contaminants like water, dust or particulates were allowed into the air stream, you will no doubt end up with a poor-quality paint job.

Within the food and drinks industry in packing lines, clean dry air is essential to maintain the necessary hygiene and ensure the end-product has the quality it needs. When air is compressed and pressurized, humid air condenses and forms water droplets which may lead to rust, which could end up in the food. Another example is drying plastics to make bottles for soda or other fluids, excessive moisture here will result in brittle bottles that are likely to break easier and a finish that is cloudier compared to clear.

As we’ve already discussed, the dew point is primarily focused on the temperature and relative humidity inside the air. But pressure is also a key affecter in the point of saturation. And so, it is necessary to look at and discuss the differences between the dew point and the pressure dew point.

Air compression increases the dew point and water vapor pressure therefore, it is crucial to consider if you are bleeding air to the atmosphere before taking any measurement. This results in two different dew points, one at the measurement point and another during the process.

Below is a chart describing the relationship between dew point temperature and relative humidity. 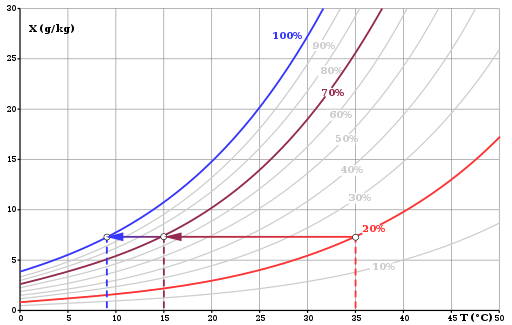 The dew point measurement, or otherwise referred to as the dew point temperature (Td) measurement, relates to the absolute amount of water vapor contained in the air while the measurement of relative humidity indicates how close the air is to its saturation point.

To understand both the temperature and pressure effect on dew point let me first introduce Dalton’s Law. It states that the total pressure of an ideal gas mixture is the sum of the partial pressures of each individual gas. The main constitutes of air are nitrogen (N2), oxygen (O2), argon (Ar), and carbon dioxide (CO2) Other air components are deemed negligible because they are so small.

As well as this, we have water vapor which is another common component of air, so for the total pressure of humid air, the following formula is applied:

P = Total pressure of the air

As we already know, the maximum possible water vapor partial pressure (e’) in the air is called the saturation vapor pressure and is determined by the temperature. At this point, the air cannot hold any more water vapor which will then result in condensation!

These relationships, including the calculation of any uncertainties, may be available online as part of an online calculator. Here we will look at a worked example of the temperature relationship in compressed air systems:

Therefore, to prevent condensation in the secondary pipe, the air must be dried in advance, so its dew point temperature is lower than the minimum possible air temperature. I.e., Td < 41°F.

This effect can easily be observed in an air compressor. If the compressed air is fully saturated, and the ambient temperature falls below the dew point, the condensed water will become present in the compressed airlines.

Dew point can be measured very accurately and directly with a dew point hygrometer (dew point mirror) which involves cooling down a temperature-controlled mirror until the condensation arises on the surface. This condensation changes the reflectivity of the mirror’s surface, which is detected by the integrated measurement optics.

The corresponding mirror temperature then given is the dew point temperature of the air you’re measuring! Most modern dew point mirrors can measure within a range of -14°F up to 212 °F with a very high accuracy of ±0.18°F Td.

These high-precision devices are quite expensive devices however and are primarily employed as reference devices in calibration laboratories and aren’t suitable for compressed air line installation.

Instead, a compact dew point transmitter with a hygrometric measuring principle can be found installed into compressed airlines. These dew point meters feature a temperature sensor and a capacitive humidity sensor.

From measuring the relative humidity and temperature of the air, the device then calculates the dew point temperature with an accuracy of around ±3.6°F Td, suitable for a measuring range between -76°F and 140°F.

How do you find the dew point of compressed air?

To accurately measure compressed air dew point values it must be done using a specialized dew point sensor which can be incorporated into air compression system setups. To measure pressure dew point, the regulating device is installed downstream of the sensor, so that when the isolation valve is opened, the sensor is at its process pressure. To measure the dew point at atmospheric pressure, the regulating device should be installed upstream of the dew point sensor.

Yes, moisture is an inevitable byproduct of compressed air.  All air contains a certain amount of water vapor within it, and the volume of water held by the air will vary depending on its temperature and pressure. The higher the temperature, the more water air is able to hold and as the pressure increases, water vapor condenses back into a liquid and you’re left with what is in your system.

What is the humidity of compressed air?

When air is compressed and its pressure and temperature are increased, compressed air is said to have 100% relative humidity.

If you have any questions about compressed air dew point, please leave a comment below, with a photo if applicable, so that someone can help you!

Bostitch compressor will not start

Is there a pump replacement for an Ingersoll Rand 5E6VA